The Battle of Rhode Island (Part I)

(This essay was originally published as “Recounting the Battle of Rhode Island” by the Newport Daily News on August 28, 2018.)

(Note: This is the first of two essays, celebrating the 240th anniversary of the battle.)

Beginning with the Sugar Act of 1764 to 1776, the British government tried in various ways to recoup from the American colonies expenses incurred from defending them during the Seven Years War (1756-1763).
Rhode Islanders became increasingly belligerent to what they viewed as unjustified British coercion. In July 1764, Newporters went to Fort George on Goat Island and began firing on the British schooner St. John, after the ship had seized a cargo of sugar from a New York merchant ship. Soon afterwards the HMS Maidstone appeared at Newport with a similar mission: confiscation and impressment of Americans into military service. Incensed Newporters stole one of its boats, dragged it to the Parade (Washington Square) and burned it.
In July 1769, Newporters stripped and burned the Liberty, an armed sloop which had been harassing merchant vessels on the Bay. On June 9, 1772, John Brown of Providence and 60 men seized the HMS Gaspee by force, brought its crew ashore, and set the ship ablaze. Historian Rockwell Stensrud states: “The total destruction of the HMS Gaspee … was a direct assault on the Royal Navy and thus an offensive action against the king and Great Britain itself.”
The so-called “shot heard round the world” came at Lexington on April 19, 1775. British regulars and American militia exchanged fire, and eight Americans lay dead. There was more fighting at Concord that morning, five miles away, before the British retreated to Boston. The war was on.

On May 4, 1776, the colony of Rhode Island severed its relation with the British Crown. The colony’s General Assembly listed the many grievances against Great Britain and its king and declared that all allegiance to the king by “his subjects, in this his colony and dominion of Rhode Island and Providence Plantations, BE, AND THE SAME IS HEREBY REPEALED.”

Though we celebrate this day as our Independence Day, actually it was not until July 19, that the RI General Assembly approved the Continental Congress’s resolution declaring full independence. 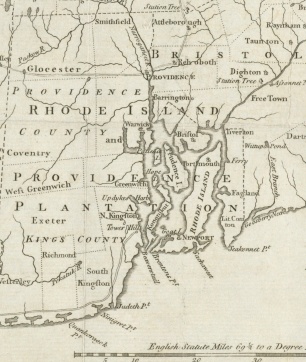 The British decided to seize and occupy Aquidneck Island and Narragansett Bay for several reasons. The British military viewed the bay and the island as a good base of operations in New England. From the bay British forces could launch operations to other parts of New England, as well as defend New York City merchant ships from revolutionary privateers operating from Boston and other ports. The fleet could spend the winter in a protected, deep-water port. At the same time, the Royal Navy could blockade Narragansett Bay and prevent pesky colonial privateers and commercial vessels from Providence, Bristol, Warren and other port towns from exiting the bay.

Politically, Newport was home to many Loyalists, Americans who remained loyal to the British Crown. Many Loyalist Newport merchants, for example, could be counted on to support British efforts so that the strained economic and social connections could be restored.

When the British force arrived offshore on December 7, 1776, Newport’s population had plummeted from a prewar high of about 9,000 to 5,000 or lower. The main cause of this was the fear of bombardment from Royal Navy warships and of British occupation. Later that day the armada dropped anchor west of Weaver’s Cove (near Melville, Portsmouth). The force consisted of seven ships of the line (the battleships of the day), four frigates (lighter warships), and seventy transports. Onboard were about 7,000 soldiers and about 1,500 civilians. The military forces consisted of both British soldiers and their German allies called Hessians (Germans), about equal in number, as well as some Loyalist units. Certainly a good number of Newporters welcomed the arrival and shared the reaction of Hessian officer C. Wende, who recorded in his regimental journal, “One can hardly imagine how majestic the arriving fleet looked.”

In January 1777, Americans began planning to attack Aquidneck Island to end the British occupation. They estimated that they would need at least 8,000 troops. Calls went out to the New England states to send units, which were slow in coming. In the early fall, Massachusetts and Connecticut promised more militia units, and planning for the operation increased. Major General Joseph Spencer was given command, and so the operation was soon called “Spencer’s Expedition.”

All forces were to rendezvous in Tiverton by October 1, 1777. Getting enough boats to transport the troops presented a substantial problem; however, by October, Nannaquaket Pond in Tiverton was filled with 130 boats. In place at Howland’s and Fogland Ferries were units from Rhode Island, Massachusetts, Connecticut, and New Hampshire. These 8,000 troops would face an estimated force of 3,600 British and Hessians.

By the middle of October, the force was ready; however, boat logistical problems arose. Also, over the next few days, British intelligence learned of the operation. Finally, on Oct 22, the weather turned bad; desertions increased.

By Oct 25, the force had diminished to 5,300, lessening the chances of success. The next day, Gen. Spencer cancelled the operation and released the remaining troops, causing great disappointment and recriminations.

Fred Zilian (zilianblog.com; Twitter: @Fred Zilian) teaches history and politics at Salve Regina University, writes for The Hill and the History News Network, and is a monthly columnist.

“The Battle of Rhode Island.” Rhode Island Society of the Sons of the American Revolution. http://rhodeislandsar.org/battleri.htm. Accessed April 14, 2019.

Geake, Robert A. From Slaves to Soldiers, The 1st Rhode Island Regiment in the American Revolution. Yardley, PA: Westholme, 2016.

MacKenzie, Frederick. The Diary of Frederick MacKenzie, Giving a Daily Narrative of His Military Service as an Officer of the Regiment of Royal Welch Fusiliers During the Years 1775-1781 in Massachusetts, Rhode Island, and New York. Vol I & II. Cambridge, MA: Harvard University Press, 1930.