Three hundred eighty years ago, the General Court of Massachusetts Bay Colony convicted Anne Hutchinson of heresy and banished her from the colony. More than just a founding mother of Portsmouth, RI, she can be considered a founding mother of religious tolerance in America.

Born Anne Marbury on July 17, 1591, in Alford, England, Anne Hutchinson was raised with no formal schooling, as was common for the times. However, she was well-educated by her father Francis Marbury, a clergyman, schoolmaster, and Puritan reformer. Her father instilled in her an ability to think critically, an uncommon confidence in her own goodness, a strong religious faith, and a desire to demonstrate that faith to others.

In 1634, Anne, her husband William, and their 11 children crossed the Atlantic to the new colony. A female colonist wrote of the wilderness they found: “the air is sharp, the rocks many, the trees innumerable, the grass little, the winter cold, the summer hot, the gnats in summer biting, the wolves at midnight howling.”

Only four years earlier, a group of Puritans formed the Massachusetts Bay Colony under a royal charter. The Puritans had been harassed and even imprisoned in England for their religious beliefs, specifically the desire to “purify” the Church of England by removing all practices and rituals of the Roman Catholic Church. In the New World, they were free to create a “true” society and state. Theirs would be a “city upon a hill,” as John Winthrop, the first governor, stated in a speech, a near theocracy in which religious and political leadership was closely intertwined.

It is difficult for us today in the increasingly secular Western world to grasp how religion pervaded life for these Puritans in the 1630s. Europe was in the midst of the Thirty Years War, the last of Europe’s religious wars, which saw most of Europe riven by political-religious violence. In daily life the average colonist was constantly concerned with her/his soul and salvation. The devil’s temptations and the potential for sin were ubiquitous.
Winthrop, as the leader and governor of this burgeoning colony, saw himself as the Moses of a new Exodus, establishing a New Jerusalem and initiating essentially a Second Protestant Reformation. To be sure, he would be ever vigilant for anything or anyone who might threaten this vision.

It is also difficult today, with the many advances in women’s civil and political rights over the past century, to comprehend how unusual Anne Hutchinson stood in her day. She was well known among the colonists for her services as a competent nurse and midwife. Primed by her father for spiritual instruction, with a gifted mind and strong will, she began a year after her arrival to hold weekly meetings with women in which she discussed the weekly sermons given by the colony’s ministers. Beyond the sermons she also incorporated discussions of scripture and theology. This occurred at a time when women could not vote, teach outside the home, or hold public office.

Initially a handful of women came to the meetings, then scores. Eventually she crossed a red line: she invited men into her circle. Her commentary on the ministers’ sermons became longer and more critical, and she began discussing scripture and theology more generally. She emphasized especially that a soul’s salvation depended on a “covenant of grace” rather than a “covenant of works.” Salvation was a gift and not an objective goal one could win with right actions.

Anne Hutchinson proved to be too great a threat to Winthrop and the other political and religious leaders of the colony. Some viewed her as a witch; others saw her as possessed by the devil. Winthrop called her an “instrument of Satan,” an “American Jezebel,” and suspected her of aiming to establish a “community of women” to nurture “abominable wickedness.”

It was a cold November day when she was called before the General Court of Massachusetts, a group of 40 black-clad men at the meeting house in Cambridge, led by Winthrop. Hutchinson was 46 years old, pregnant, of average height, the mother of 12, and grandmother of one. With a white coif covering her head and a white linen smock and neckerchief, the rest of her clothing was black. She was forced to stand while the men sat on benches. 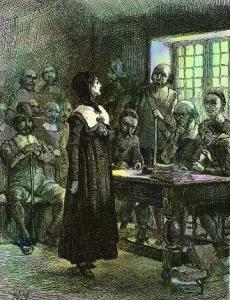 “Anne Hutchinson is present,” announced a male voice. Winthrop began: “Mistress Hutchinson, you are called here as one of those that have troubled the peace of the commonwealth and the churched here.” “You are known to be a woman that hath had a great share in the promoting and divulging of those opinions that are the cause of this trouble ….”

Ending his opening remarks, he stated: “If you be in an erroneous way we may reduce you.” … “If you be obstinate in your course then the court may take such course that you may trouble us no further.”

Hutchinson, probably the first female defendant in the New World, stood steadfast after he finished and replied: “I am called here to answer before you, but I hear no things laid to my charge.”