(A version of this essay was published as “What It Means to Be a Good Citizen in the Age of Colin Kaepernick” by TheHill.com, on 11-17-17.)

GQ’s recent selection of Colin Kaepernick as a “man of the year,” specifically “citizen of the year,” and recent Veteran’s Day ceremonies have served to re-invigorate the debate over the requirements of a good American citizen. But the debate is misguided. Rather than debating whether Kaepernick is a good or rotten citizen and whether NFL owners should fire similarly protesting players, we should be debating how to fortify not only American patriotism but also American civicism.

Kaepernick and I have a number of similarities. We both share diverse ancestries. He was born to a Caucasian mother and an African-American father. Only recently through DNA analysis, I have discovered I am not only Italian and German, but also African and British. Despite being separated by two generations, Kaepernick’s life in high school and beyond has had similarities to mine. In high school we both played the same three sports and in football were both quarterbacks. We both played intercollegiate football, although he had a bit more success. I played only freshman year. When I arrived at the U.S. Military Academy, there were 17 other freshmen who also wanted to quarterback Army in vanquishing Navy on national TV.

Thereafter our paths diverged; however, we both became staunch patriots. I chose a 21-year career in the Army; he chose a different, less conventional, patriotic path. In August 2016, he challenged a conventional ritual of patriotism by sitting during the national anthem at pre-season games, eventually switching to kneeling.

We can now see his actions came at considerable personal expense. He argued: “There is police brutality — people of color have been targeted by police.” He criticized the inadequate training police receive. He asserted he was not “going to show pride in a flag for a country that oppresses black people and people of color.”

Historians normally date the birth of the modern concept of citizenship from the period of the French Revolution and Napoleonic France (1789-1815); however, it has roots in the ancient world. In the Western tradition, the roots of citizenship and the good citizen reach back to ancient Athens and Republican Rome. The word “citizen” stems from the Latin word “civis,” meaning citizen. Citizens had both rights from and duties to the political body — the city-state. When the state — facing an emergency — summoned the citizen to military duty, the citizen had to respond, putting his allegiance to the state above allegiance to family, clan, tribe or political faction.

Aristotle maintained that a human being could reach his full potential only through the city-state. To Pericles, living life aloof from the affairs of state was stupidity. The Greeks called such a person an “idiotes.” 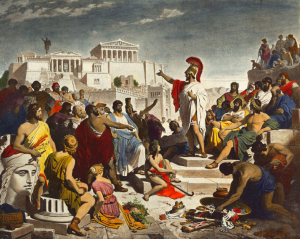 In addition to words for citizen (civis) and citizenship (civitas), the Romans also had the word civilitas, which meant civility/politeness, but could also refer, as Mary Beard states in her book, “SPQR,” to the connectedness between Roman citizens: “we are all citizens together.” When I, as an individual citizen, thinking of the idea of my country, show devotion and loyalty to it by reciting the pledge of allegiance or standing for the national anthem, I am showing patriotism. When I do this relating more to my fellow citizens, I show not only patriotism but also civicism, a word only rarely seen in our political discussions.

We would be greatly aided in fortifying both patriotism and civicism with a different president. President Trump has yet to show genuine leadership in uniting us in our common civic project. Were it possible with a wave of the wand, we should all increase our opportunities to get to know each other: eat, listen to music, and dance together. As the Germans do, we should consider state subsidization of admission for the common person to the theater and to sporting events, so that people from all levels of American society could sit near each other and enjoy these events. These could have salutary results. We might not only get to know one another, but also fall in love and have children. Over generations, this would go a long way in fighting prejudice. It is very difficult, I can say from experience, to hate one’s grandchild.

The greatest step to fortify civicism would be to institute a program of national service, with the requirement for at least one year of some type of service to the country. In addition to the option of military service, there could be many options outside the military. The needs of our society are great: the sick, the elderly, the homeless, the addicted, and the ravaged by domestic abuse, PTSD or natural disaster. If accomplished between the ages of 18-25, these young cohorts would not only fill important needs, but also gain another year of experience to know themselves and decide on their futures, and to experience places and people in different corners of America.

We would have fewer college students repeat the words that one of mine recently said as he shrugged: “Yes, I went to college because it was what you do after high school.” The program could help us build walkways to each other and break down walls of prejudice. Finally, it could fight our society’s deification of individualism and also the multiple tribalisms, which have grown over the past four decades from the internet, the iphone, and the excesses of American culture.

In his inaugural speech, President John F. Kennedy inspired my generation to: “Ask not what your country can do for you; ask what you can do for your country.” A program of national service would institutionalize this service to country, and it would fortify our civicism, something we shall need to confront the many challenges of the 21st century, including a rising China and a Russia bent on our self-destruction.

Fred Zilian teaches history and politics at Salve Regina University, in Newport, Rhode Island. Follow him on Twitter at @FredZilian.