(This essay was originally published as “In 1843, slavery was banned in Rhode Island,” in the Newport Daily News on May 29, 2018.)
(Note: This is the second in a series of essays on slavery in Rhode Island.)

The first slaves in the colony of Rhode Island were Native Americans, prisoners of war from the conflicts with colonists in southern New England in the 17th century. In 1638, New Englanders began to import Africans by trading Native Americans captured in the Pequot War (1636-37) for black slaves from the West Indies. Sometime after 1638, the first African slaves entered Rhode Island. They were sparse in the colony throughout the 17th century, with only 175 total African slaves in 1680.

In the 18th century, Rhode Island merchants, with their proximity to and affinity for the sea, engaged in the Atlantic trading system of West Africa, the West Indies (Caribbean), and North American port cities, exporting lumber, foodstuffs, rum, and horses; and importing sugar, molasses, cotton, spices, linen, woolen clothes, iron, and slaves. By 1730, the colony came to dominate the North American slave trade.

Most enslaved people imported into the colony of Rhode Island were bought by owners of farms in what we call “South County” (technically Washington County) and what in the 18th century was called “Narragansett Country.” Eventually these farms grew to be plantations comparable to those in America’s southern colonies, and with these plantations a class of “Narragansett planters” emerged. By mid-century large plantations thrived from the village of Wickford south to Point Judith and west to Connecticut.

At the heart of the economy of Narragansett Country were products grown and produced by enslaved people. This plantation system bred horses, cattle, and sheep; produced dairy products; and also grew Indian corn, rye, hemp, flax, and tobacco. The planters then, through merchants in Newport and Providence, exported these products to southern colonial ports and the West Indies. As the southern climates were harsh on livestock, horses, beef, and dairy products were in demand. The wealthiest of the planters hired ships themselves to export their goods directly.

By the 1730s, 20-30 families had established farms in Narragansett Country and had acquired slaves—generally five to 40—to work them. By 1740, this area had the highest concentration of enslaved people in the colony; by 1755, one in three residents was a slave. Though only a few Narragansett planters were large slave owners, historian Christy Clark-Pujara states that ultimately “thousands of enslaved men, women, and children” in this area produced foodstuffs and raised livestock for trade.

The planter class made fortunes on the lucrative trade rooted in slavery, especially cheese exports. Competing with dairy farms in the colonies of New Jersey and New York, Rhode Island farmers produced the most cheese of all. Robert Hazard, a successful Narragansett planter, owned seventeen acres, had about one hundred cows, and produced 13,000 pounds of cheese annually. The Champlin farm had 42 cows that produced 9,200 pounds annually. 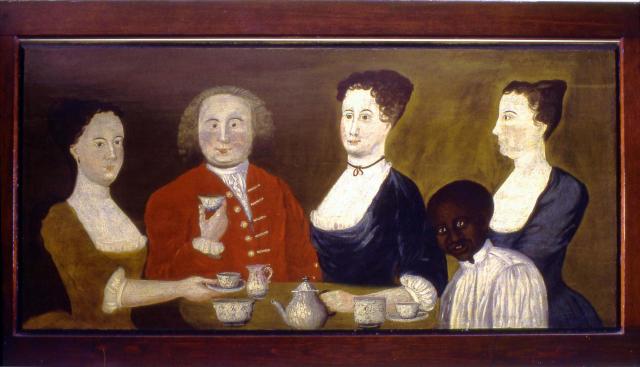 Portrait of John Potter (1716-1787) and his family including three women and a young black servant. John Potter was a wealthy South Kingstown planter.
COLLECTION OF THE NEWPORT HISTORICAL SOCIETY

The wealth of the planter class enabled the families to lead an elaborate lifestyle, similar to southern planters. They commissioned portraits, hired private tutors for their children, took European vacations, enjoyed horse-racing, and sought to imitate the lifestyle of the landed gentry of England. They also dominated the political affairs of the region.

Richard Smith, Jr., was one of the first Narragansett planters. He inherited his farm from his father, Richard Smith, a contemporary of Roger Williams, the founder of the colony and of Providence. The site of the farm was an area called “Cocumscussoc” by the Narragansett Native Americans. Williams had established a trading post there with the Native Americans and learned their language and customs. Williams reportedly said that Smith: “Put up …the first English house…in Nahigonsik Countrey.”

Smith, Jr., died in 1692, leaving the farm to the Updikes who developed it into one the great plantations of 18th century New England. At its height, it contained more than 3,000 acres, and was divided into five farms, worked by tenant farmers, indentured servants, and enslaved people. The Updikes dealt primarily in livestock and dairy products, producing cheese, other farm crops, and a breed of horse known as the Narragansett pacer.

Cocumscussoc still exists today as a park along with a colonial house known as Smith’s Castle, seasonally open to the public. (See: smithscastle.org)

This plantation system flourished until the late 1760s. The final blow came with disruptions caused by the American Revolution and the British-Hessian occupation of Newport (1776-79).

(See essay #3: The Business of Slavery in Colonial Newport.)

3 Responses to Slavery in Narragansett Country