(Note: This is the first in a series of essays on Slavery in Rhode Island. It was originally published in the Newport Daily News on April 27, 2018.)

After a slow beginning in the 17th century, the colony of Rhode Island came to dominate the slave trade in British North America in the 18th century.

Slavery by the British began in North America when they brought the first African slaves to the colony of Jamestown, Virginia, in about 1619.

Slavery in Rhode Island began probably with the colony’s establishment in 1636. The first slaves in the colony were surely Native Americans, not Africans. Prisoners of war from the two major Indian wars in southern New England in the 17th century—the Pequot War (1636-37) and King Philip’s/Metacom’s War (1675-76)—became slaves, many of whom were sold abroad. Many more of them became destitute and bound themselves as indentured servants to colonists, some for decades.

The slavery of Native Americans declined as the century wore on, with Providence and Warwick banning their enslavement in 1676. More and more Rhode Islanders wanted to distance themselves from Native Americans and simply did not want them in their settlements, even as slaves and servants. The Newport Town Council eventually made it illegal to sell firearms to Native Americans; Portsmouth banished them to “live in the woods.” Merchants were disallowed from trading with them, selling them liquor, or repairing their firearms.

Seeing the profit to be made, Rhode Island merchants, with their proximity to and affinity for the sea, became a part of the Atlantic trading system of the 18th century, including slave trading. Many of the names of these merchants dot Newport County today: Malbone, Banister, Gardner, Wanton, Brenton, Collins, Vernon, Channing, and Lopez. They engaged in commerce with West Africa, the West Indies (Caribbean), and North American port cities, exporting lumber, beef, pork, butter, cheese, onions, cider, candles, and horses; and importing sugar, molasses, cotton, ginger, indigo, linen, woolen clothes, and Spanish iron. This trade had positive ripple effects throughout the local economy and the economies of the trading ports.

The first African slaves entered the northern colonies in the 1620s and were concentrated in New Netherland, the Dutch colony that eventually became New York City.

African slaves were sparse in the colony of Rhode Island throughout the 17th century, with only 175 total slaves in 1680. Prior to 1696, the English Royal African Company monopolized the Atlantic slave trade. However, when this was lifted, Rhode Islanders aggressively expanded into the Atlantic trading system, and therefore, the slave trade.

In 1713, Rhode Island slave traders introduced a new export into the trading system—rum. Slave traders in Africa came to prefer this rum over the previous liquor of choice, French brandy. Within 50 years there were close to 30 distilleries in the colony, 18 in Newport alone. Thus the so-called “triangular trade” system emerged within the larger Atlantic system. In its simplest form, the system entailed the rum produced in Rhode Island being exported to the slave coast of West Africa. There it was traded for slaves who made the dreaded Middle Passage across the Atlantic, most going to the Caribbean. There they were traded for sugar and molasses, a key ingredient of rum. The molasses was then brought to the colony for processing into more rum. 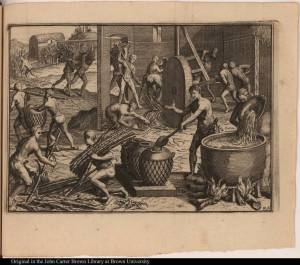 By 1730, most of the trades and occupations in Rhode Island were somehow related to slavery. Slave traders kept busy shipbuilders, sailors, caulkers, sailmakers, carpenters, rope-makers, painters, barrel-makers, and dock workers. Clerks and warehouse managers administered the system. In addition to these tradesmen, additional crew members were needed to control the enslaved during the voyages.

Merchants from Newport paid significant taxes and duties to the city, which allowed public works projects. Clark-Pujara concludes: “The streets of Newport were paved and its bridges and country roads mended through the duties collected on slave imports. In many ways, the business of slavery literally built Rhode Island.”