(This essay was originally published as “Despite Roger Williams’ Efforts, Providence Burns Down,” in the Providence Journal on March 29, 2016.)

Three hundred and forty years ago today Divine Providence did not smile kindly on the burgeoning town of Providence in the colony of Rhode Island. On March 29, 1676, Native Americans attacked and set it ablaze, one of many New England towns which met this fate during King Philip’s War, 1675-78. This war, named after the leader of the Wampanoag, Metacomet (with the European name of Philip), devastated both the English settlers and the Native Americans. About one-third of the towns of New England towns (Connecticut to Maine) were destroyed. Historian Nathaniel Philbrick estimates that per capita the war was twice as bloody as the Civil War and seven times as deadly as the Revolutionary War.

There were several underlying causes to the conflict. First, the pressure of demographics from the wave of migration to America. The Spanish,  French, Dutch, and English were establishing settlements from Florida to Maine. The Mayflower Pilgrims landed at Plymouth Rock in 1620. While these first settlers in New England sought to maintain peaceful relations with native peoples, later groups came with various motives and did not necessarily share the same view. Over the succeeding decades, pressure on the land and the Native Americans increased. By 1676, it is estimated that the European population of New England was about 70,000.

Second, differing conceptions of agreements and of the relationship between humans and the land. The English came from a capitalistic society based on the right to own private property and on the rule of written law and contracts. Native Americans did not put much stock in written contracts and did not commonly accept that human beings could “own” land. Misunderstandings and encroachments followed.

Third, power politics. Many different Native American tribes occupied New England, the largest being the Wampanoag, Nipmuck, Narragansett, Mohegan, and Pequot. They could be friendly but also bitter enemies. European settlers entered this political environment, and complicated it. As misunderstandings and incidents multiplied, so did mistrust.

Fourth, the death in 1661 of Massasoit, the leader of the Wampanoag and friend of the settlers, followed by the death of his eldest son, Wamsutta, in 1662. This brought Metacomet to the leadership of the Wampanoag tribe. Unlike his father, he did not strive for peaceful relations with the settlers; rather he became more and more irritated by their increasing numbers and their ways.

The immediate cause for the war came in June 1675 when three Wampanoag were brought to trial for the death of a Christianized Indian, John Sassamon. He had earlier informed the English that Metacomet was building a Native American alliance to wage war against the English. The three men were found guilty and were hanged on June 8, 1675, at Plymouth. On June 20, a band of Pokanoket-Wampanoag attacked the Plymouth Colony settlement at Swansea, burning it and killing several people.

The spring of 1676 brought calamity to English settlements from the Connecticut River to Maine. After successful attacks on English militia and their Native American allies on the Blackstone River and then at Rehoboth, the Native Americans approached Providence on March 29. Its approximate 500 residents had already departed for the protection of Aquidneck Island. Roger Williams, the town’s founder and now seventy-seven years old, and about 30 men remained. The natives set the town ablaze. 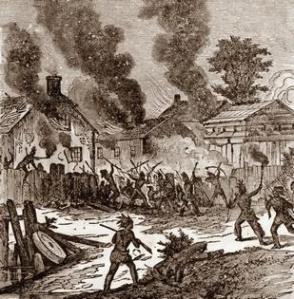 In a letter to his brother in Newport, Williams described the scene. After accosting a group of the attackers, he asked them why they were burning and killing. “This house of mine now burning … hath lodged kindly some thousands of you these ten years.” They mentioned the support that Rhode Island had given to colonies assaulting them.

“I told them they … had forgot they were mankind and ran about the country like wolves tearing and devouring the innocent and peaceable…. They confessed they were in a strange way.”  After arguing with them more, Williams eventually offered to serve as peacemaker. The natives declined, indicating that after they settled more scores with Plymouth Colony over the next month, they might return. “We parted and they were so civil that they called after me and bid me not go near the burned houses….”

Warren, James A. God, War, and Providence: The Epic Struggle of Roger Williams and the Narragansett Indians Against the Puritans of New England. NY: Scribner, 2018.

3 Responses to Despite Roger Williams’ Efforts, Providence Burns in 1676