(Originally published by the Newport Daily News on October 31, 2017.)

Five hundred years ago, Martin Luther initiated the Protestant Reformation with his 95 Theses, challenging the pope’s authority and denouncing the sale of indulgences by the Roman Catholic Church. Facilitated by the printing press, the Reformation spread throughout Christendom, creating a definitive schism which persists today, something which would have shocked Luther. He was hoping to reform the Catholic Church from within, not begin a political-social-religious revolution.

Luther was not the first individual to challenge the pope and Catholic Church doctrine during this time period. In the late 14th century, Oxford scholar John Wycliffe criticized the material wealth of the church and sought greater emphasis on scripture, drawing the church’s condemnation. In the 15th century, Jan Hus in the city of Prague of the Czech Republic also emphasized scripture over church hierarchy. He was arrested, charged with heresy, and burned at the stake in 1415.

Martin Luther began his religious vocation as a young man of 21. Caught in a terrible thunderstorm, he prayed to St. Anne that if he was saved, he would become a monk. Having lived through the storm, he fulfilled his vow by joining the monastic order of Augustinian Hermits in the German city of Erfurt. He pursued his quest for salvation relentlessly but found that no matter how devout and pious he acted, he still felt sinful.
Then came the revelation. Reading Paul’s letter to the Roman Christians, Luther seized on another path to salvation besides good works and Catholic ritual: simply having faith in God’s promises, specifically belief in Jesus Christ as savior—justification by faith alone. Because he had achieved this epiphany through studying the Bible, he believed that scripture and not the pope or any of the Church leadership was the true path to religious understanding. Justification by faith and the Bible as sole authority would become the two fundamental pillars of the Protestant Reformation.

The spark that ignited Luther and the Reformation in 1517 was the Catholic Church’s sale of indulgences, supposedly allowing one’s soul to transit purgatory more quickly. Johann Tetzel, a Dominican monk, was the pope’s representative in Germany. Pope Leo X needed funds to continue the construction of St. Peter’s Basilica in Rome. Tetzel’s slogan was: “As soon as the coin in the coffer rings, the soul from purgatory springs.” 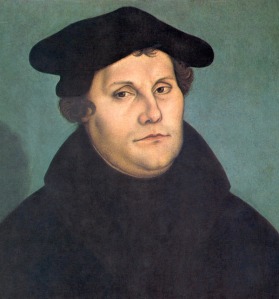 Luther was sickened and angered at this commercialization of salvation. He prepared his “Disputation on the Power of Indulgences,” known as the Ninety-Five Theses. According to tradition, he nailed these to the door of All Saints’ Church in Wittenberg, Saxony, October 31, 1517. They denounced indulgences as a means of salvation.

The Church ordered Luther to retract his statements, but he refused, repeatedly making statements denying the papal foundations of the church and claiming faith in Christ as the foundation.

In January 1521, a papal decree declared him a heretic and excommunicated him. Several months later in April, he appeared before the Imperial Diet (assembly) of the Holy Roman Empire, led by the Emperor Charles V. Luther stood brave and steadfast against the charges and made his famous reply:

Unless I am convicted by Scripture and plain reason—I do not accept the authority of popes and councils, for they have contradicted each other—my conscience is captive to the Word of God. I cannot recant and I will not recant anything, for to go against conscience is neither right nor safe. Here I stand, I cannot to otherwise. God help me. Amen.

The printing press, invented in the mid-15th century, greatly facilitated the propagation of Luther’s ideas. His Theses were quickly translated from Latin into German. Now many common Germans, sharing his resentments toward an apparently corrupt Catholic Church, joined the movement. Over the next 130 years, Western Europe was riven by religious, political, and social turmoil, conflict, and war, ending in 1648 with the conclusion of the Thirty Years War, the last of Europe’s religious wars.
On January 16 each year, Americans honor the memory of Martin Luther King, Jr., so named by his father, a Baptist minister in Atlanta, who became interested in Luther during a trip to Europe.

It was on a research trip to Germany in 1991, shortly after German Unification, that I was able to spend several hours in Wittenberg in the former East Germany. I was thrilled to visit All Saints’ Church and Luther’s home. Naturally, I followed my sightseeing by eating a good bratwurst, German roll, und ein Bier.

This year the Germans have been celebrating the anniversary with over 1,000 events in 100 different locations. Minnesota may be the center of celebration in America. Lutheran Pastor Nancy Monke of Underwood, Minn., said: “The whole idea of individual freedom, that you can protest the church or any authority, really took off from him.”

This entry was posted in Uncategorized and tagged Martin Luther, Protestant Reformation. Bookmark the permalink.

5 Responses to Martin Luther: Courageous Challenger of the Church