Memorial Day: A Time to Honor and Remember

Healthy civilizations remember and honor those who have died serving them. These memorial occasions are also opportune times to reflect on the civilization’s creed—its fundamental values and beliefs.
Almost 2450 years ago, Pericles, the great statesman of ancient Athens, did just this in one of the most famous speeches of Western Civilization. At the end of the first year of the Peloponnesian War (430 BCE), he was called upon to give a funeral oration to honor the fallen. Instead of giving mere praise and consolation, he spoke to the idea of Athens. “Our city is called a democracy because it is governed by the many, not the few. In the realm of private disputes everyone is equal before the law ….” “We alone regard the man who takes no part in politics not as someone who minds his own business but as useless.” 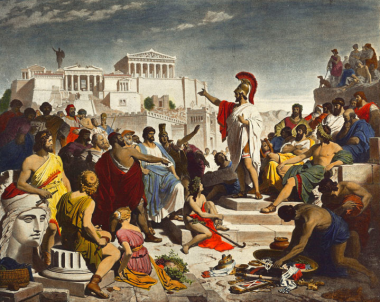 Things hadn’t changed all that much in the annual Memorial Day parade in my hometown of Hasbrouck Heights, New Jersey, where I found myself a few years ago. The last one I had attended was the last one I took part in—maybe 1960—as a cub scout in Troop 49.
The parade lineup looked about the same. In the first section were the high school band, mayor and council, board of education, policemen and ladies auxiliary, American Legion, VFW, disabled veterans, and firemen. The second section followed with the service organizations, such as the Elks, Knights of Columbus, and Women’s Club. The third section included the boy scouts and cub scouts, the girl scouts and brownies. Bringing up the rear was that beautiful, big red fire engine.

There were no significant changes in the setting either. Memorial Park, on whose corner I had dutifully posted myself many times as a member of the sixth-grade safety patrol, appeared the same. The memorial itself was unchanged: a large, four-sided piece of grayish-white rock, with metal plates on each side, stationed in the middle of a sea of white pebbles. The plates bore lists of names, names, and more names.

The town’s citizens were out in force as they were in the late 1950s- early 1960s, the heady days of the Cold War. Despite the Soviet launching of Sputnik in 1957, I knew we were still the greatest superpower. From my boyish perspective, we had to be. Despite the loss of Buddy Holly in 1959, rock ‘n roll was going strong with Elvis, Fats Domino, Frankie Avalon, and the Shirelles. As a budding baseball player and avid fan, who collected baseball cards of those perennially strong New York Yankees, I reasoned that the “World Series” was always held in the U. S., never in the Soviet Union.

The ceremony itself seemed to be an echo of those generations ago. I recognized a good number of the town officials and veterans though their faces were now etched with wrinkles and their hair was now hoary, or gone. The schedule of events still consisted of that uniquely American blend of God, country, and commemoration: the opening prayer, the national anthem, and the mayor’s remarks.

Finally, the roll call. As a boy, I never understood why one man recited names and the other monotonously answered with “Absent.” Eventually I came to understand this solemn moment in honoring each of the town’s fallen by name. Democracies make it a practice to place value on the lives of each and every individual, no matter what make-up. One can certainly realize this in visiting the Vietnam Veterans Memorial in Washington, DC, or the 9/11 Memorial in New York City.

The dreary, solemn notes of “Taps” were always followed by the most exciting part of the entire ceremony—the rifle salute. Three volleys. My friends and I would scramble for the shells as they were ejected from the rifle chambers. Finally, came the placing of the wreaths and poppies, and the closing remarks.

Since this took place in the late 1980s, the last three men on the roll call were townsmen who died in the Vietnam War. The last man called was Mike Mackerel. He was one of those, as President Ronald Reagan called them, “boys of Vietnam who fought a terrible and vicious war without enough support from home.” A year or two older than I, I didn’t really know him that well, but I can remember him—thin and scrappy—playing second base for the Kiwanis Club little league team, while I played for the Elks. As I turned to walk home, I spied through the dispersing crowd my high school classmate, Marty. He had served in Vietnam while I had served in West Germany.

In the memorial services around Newport County this weekend, we shall remember and honor our fallen. We should also recognize and appreciate those fighting for us today in many far-off places. Finally, it is an appropriate occasion to remind ourselves of some of the key words of our common creed, such as: country, democracy, service, courage, and sacrifice.