(This essay was originally published as “Defeat, denial, and surrender,” in the Newport Daily News, April 9, 2015.)

Despite the victory delusions of Confederate President Jefferson Davis, the fortunes of the South deteriorated dramatically in March 1865. Gen. Robert E. Lee’s Army of Northern Virginia was now reduced to 55,000 men, hunkered down defending Petersburg and shielding the southern capital of Richmond as it endured the siege of Gen. Ulysses S. Grant’s army of 120,000. Having lost hope in their cause, Lee’s men were hungry, despondent, and now deserting in increasing numbers.

By March 24, Gen. William T. Sherman had completed the second leg of his devastating march through the deep south, pulverizing anything of value and punishing the people in an effort to sap the last vestiges of their will to endure. The army reserved its harshest treatment for South Carolina, the first state to secede from the Union. He now moved north to assist Grant.

After nine months of siege, Grant sensed Lee’s vulnerability and on April 2 ordered a general offensive along the entire front. On this pleasant spring Sunday, President Davis attended church. A messenger suddenly came to him with a telegram. It was from Gen. Lee: Richmond must be evacuated. Davis hurried from the church, signaling the congregation with his ashen face the ill tidings.

Escorted by ten sailors, President Lincoln arrived in Richmond shortly after the first Union soldiers. Admiral David Porter nervously scanned the windows for assassins. Lincoln was soon surrounded by black people shouting: “Glory to God!” “Bless the Lord!” “The great messiah!” “Come to free his children from bondage. Glory, hallelujah!” One black man fell to his knees. “Don’t kneel to me,” Lincoln said. “That is not right. You must kneel to God only….”

Lee’s Army was now reduced to a mere 35,000 men. He planned to link up with Gen. Joseph E. Johnston at Danville, Virginia. Already there was President Davis who asserted: “Relieved from the necessity of guarding cities … with our army free to move from point to point … nothing is now needed to render our triumph certain, but… our own unquenchable resolve.”

But resolve, itself in short supply, would not be enough. On April 7, Gen. Grant sent Gen. Lee a note calling for him to surrender, which Lee rejected. On the morning of April 9, Lee tried one final breakout which failed. Surrounded and outnumbered five to one, Lee decided to surrender. He said: “there is nothing left for me to do but go and see General Grant, and I would rather die a thousand deaths.”

One hundred and fifty years ago today, the two generals met at the home of Wilmer McLean in the village of Appomattox Court House, Virginia. Four years earlier, McLean had lived near Manassas, Virginia, the site of the first real battle of the Civil War, First Bull Run. A Union artillery shell had crashed into his dining room. Vowing to avoid the war, he had moved to this location. He justifiably asserted: “The war began in my front yard and ended in my parlor.”

There in McLean’s living room, the two generals presented quite a contrast: Lee, taller, resplendent in impeccable, full-dress uniform, with sash and engraved sword; Grant with muddied trousers and muddy boats, wearing a simple soldier’s blouse, apologizing for his shabby appearance. The West Point graduates talked informally for a while. Lee, having graduated 14 years before Grant, said he did not remember meeting Grant during the Mexican-American War. Lee eventually directed their conversation to the matters at hand. 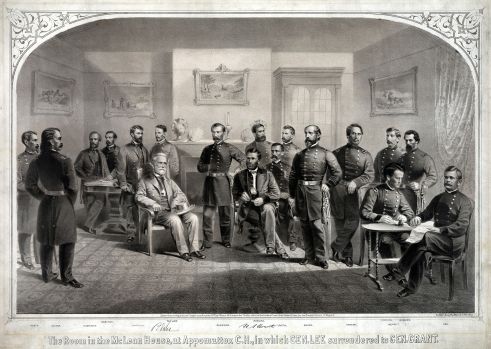 The surrender terms were generous, reflecting President Lincoln’s earlier guidance to Grant. The Confederate officers and men could return to their homes, “not to be disturbed by U.S. authority so long as they observe their paroles and the laws in force where they may reside.” They could keep their horses “to put in a crop to carry themselves and their families through the next winter.” Officers could keep their side-arms. Lee was grateful: “This will have the best possible effect upon the men and will do much toward conciliating our people.”

After the signing, Grant introduced Lee to his staff. As Lee shook the hand of Grant’s military secretary, he realized that the secretary was a native American. Lee remarked: “I am glad to see one real American here.” Ely Parker, a Seneca Indian  remarked: “We are all Americans.”

Two days later President Lincoln gave a prepared speech from a balcony of the White House praising Grant and the army and addressing the reconstruction of the Union. He included his view of favoring the enfranchisement of literate and veteran blacks. In the crowd listening was John Wilkes Booth who vowed: “That means nigger citizenship. Now, by God, I’ll put him through. That is the last speech he will ever make.”