(This essay was originally published by the Newport Daily News as Lincoln looks to the future on March 5, 2015)

On March 4, 1865, Abraham Lincoln was sworn in to his second term as the president of the United States, giving a speech which many consider his best, even better than the Gettysburg Address.

He was elected for a second term in the election of November, 1864, an election which many argued should not take place under the press of war. Republicans were understandably concerned about conceding power to the Democrats who settled on former commander of the Army of the Potomac, Major General George B. McClellan, as their candidate. However Lincoln believed that such an event, so fundamental to democracy, could not be deferred, even in wartime.

Lincoln admitted: “…I have the common pride of humanity to wish my past four year’s Administration endorsed.” He believed that he could “better serve the nation in its need and peril than any new man could possibly do,” and wanted the chance “to finish this job of putting down the rebellion, and restoring peace and prosperity to the country.” 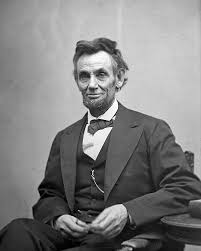 March 4, 1865, broke wet and stormy. After the swearing in of Vice President Andrew Johnson in the Senate chamber, the presidential party moved to the east front of the Capitol to repeated cheers. In the large audience stood John Wilkes Booth and Frederick Douglass.  As he began his speech, like amazing grace from above, the sun pierced through the gray sky and uplifted the rain-soaked crowd. Chief Justice Salmon Chase took it as “an auspicious omen of the dispersion of the clouds of war and the restoration of the clear sun light of prosperous peace.”

The speech was a mere 703 words and took about seven minutes, the second shortest inaugural speech in US History. It was decidedly impersonal. After the opening paragraph, he did not use the word “I”; neither did he refer to any of his previous statements or actions. Rather he sought to understand the great conflict and to look with hope and compassion toward the future.

Turning to slavery, Lincoln said: “All knew that this interest was, somehow, the cause of the war.” He continued by indicating the faulty assumptions both sides made about the magnitude and duration of the war.

Lincoln then turned at length to a markedly religious vein: “Both [sides] read the same Bible, and pray to the same God; and each invokes His aid against the other. … The prayers of both could not be answered—that of neither has been answered fully. The Almighty has his own purposes.”  He then quoted the Bible: “Woe unto the world because of offences! for it must needs be that offences come; but woe to that man by whom the offence cometh!” In referring to the offense of slavery, Lincoln stated: “He now wills to remove [it], and … He gives to both North and South, this terrible war, as the woe due to those by whom the offence came ….”

And then harshly he continued, “if God wills that [the war] continue,” until all the wealth of the slaveholder vanishes and until every drop of slave blood is repaid, “so still it must be said, ‘The judgments of the Lord are true and righteous altogether.’”

Lincoln ends with majestic compassion and magnanimity: “With malice toward none; with charity for all; with firmness in the right, as God gives us to see the right, let us strive on to finish the work we are in; to bind up the nation’s wounds; to care for him who shall have borne the battle, and for his widow, and his orphan—to do all which may achieve and cherish a just and lasting peace, among ourselves, and with all nations.”

After concluding, he turned to Chief Justice Chase and took the oath of office, ending with an emphatic: “So help me God!” He then kissed the Bible to the sound of an artillery salute and a cheering crowd.

Lincoln was not phased by the tepid initial reaction to the speech. He mentioned to Thurlow Weed that he expected it “to wear as well as—perhaps better than—any thing I have produced.” “Lots of wisdom in that document, I suspect.”

Frederick Douglass attended the reception which followed. Initially stopped by guards, he pushed his way through. Lincoln called out: “Here comes my friend Douglass. … There is no man’s opinion I value more than yours. What do you think of it?” Douglass responded, “Mr. Lincoln, it was a sacred effort.”

A retired Army officer, Fred Zilian teaches history, ethics, and political science at Portsmouth Abbey School and Salve Regina University and is a member of the Rhode Island Civil War Sesquicentennial Commemoration Commission Advisory Council. He is writing an occasional series of columns highlighting various aspects of the Civil War and their impact on Newport County and Rhode Island for The Daily News. Attend the Tribute to the Civil War and Abraham Lincoln on April 17 at the Jane Pickens Theater. Tickets at www.janepickens.com.