(Note: This essay was originally published by the Newport Daily News on March 30, 2020.)

The two most lethal pandemics in western history can help us think about the challenges and stakes we currently face with the coronavirus: the Black Death of the 14th century, and the Great Influenza Pandemic of the early 20th century.

Historian John Kelly in his book, “The Great Mortality”, calls the Black Death “the greatest natural disaster in human history.”

By virtue of the increased connectedness of the world from globalization, the coronavirus has spread much more rapidly than the Black Death, which could spread only as fast as the fastest horse or sailing ship. Like COVID-19, the Black Death originated in Asia, however, not in China but in Central Asia with the Mongols. As these fierce warriors came to dominate Eurasia, the subsequent movement of people, goods, and rats helped to spread the disease east to China and west to Europe.

The plague reached Europe in 1347 when merchants from Genoa (Italy) sailed from the Crimean Peninsula (Black Sea) to Sicily and beyond. One contemporary wrote of the sailors infected with the disease: “When the sailors reached these places [Genoa, Venice, and other Christian areas] and mixed with the people there, it was as if they had brought evil spirits with them.” It took the plague five years to spread throughout all regions of Europe.

While the World Health Organization currently estimates the coronavirus mortality rate at 3.4%, the Black Death mortality rate was exceptionally high. European cities lost 20-60% of their populations. In England and Germany entire villages simply disappeared. Between 1347-1351, historians estimate that the European population declined 25-50%.

Reactions to the Black Death varied. With life suddenly so precarious, some indulged themselves. In 1348, Giovanni Boccaccio wrote: “Day and night they went from one tavern to another drinking and carousing unrestrainedly.” Others, seeing the hand of God, sought to repent and cleanse their souls, flogging themselves with whips to win God’s forgiveness. Anti-Semitism rose dramatically as Jews were accused of causing the plague. 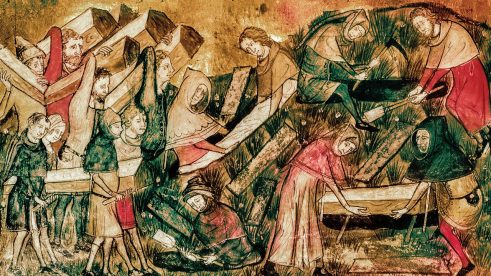 The persistence of the Black Death should give us pause. It did not simply burn through Europe in five years and vanish. Rather, there were major outbreaks in 1361, 1369, and then recurrences until the end of the fifteenth century. It was only then that the European population began to recover.

Just over one hundred years ago the world was struggling with what the Centers for Disease Control (CDC) claim was “the most severe pandemic in recent history,” the 1918 Influenza Pandemic.

It was caused by an H1N1 virus with genes originating in birds. A total of about 500 million people worldwide were infected, one-third of the world’s population. At least 50 million people died, with some estimates as high as 100 million; indeed, far more deaths than the fallen in World War I.

The sickness was first identified in the United States in the spring 1918 among military personnel, and it eventually claimed 675,000 lives in the US. It was so severe that in the period 1917-1918, the life expectancy in the US declined about 12 years, to 36.6 for men and to 42.2 for women, according to the CDC. It struck most age groups; however, it was unique in that it hit the 20-40 year age group especially hard.

Historian John M. Barry quoted one person who lived through it: “It kept people apart. You couldn’t play with your playmates, your classmates, your neighbors. The fear was so great, people were afraid to leave their homes. You had no school life, no church life, nothing. It destroyed all family and community life. People were afraid to kiss one another, afraid to eat with one another. Constantly afraid.”

Like Thucydides writing about the plague in ancient Athens during the Peloponnesian War, David Brooks, writing recently in the New York Times, is correct in considering our current situation also through moral-ethical lenses. In examining several historic pandemics and severe epidemics including the Black Death, Brooks concludes that dread “overwhelms the normal bonds of human affection.” He points out that dire situations can even challenge these bonds within families. He quotes Boccaccio who wrote: “…scarcely to be believed, fathers and mothers were found to abandon their own children, untended, unvisited, to their fate.”

In the course of this current pandemic, we Americans—despite all the wonders of modern medicine and our world-class medical facilities and care givers—will still be challenged with moral-ethical questions. How many provisions and sanitizer bottles do I buy and how much do I leave for my fellow citizen? If the disease spikes, who will get the limited number of beds and respirators, and the use of limited ICU facilities? How should I help the family of a sick or fallen fellow citizen?

Fred Zilian (zilianblog.com; Twitter: @FredZilian) is an adjunct professor of history and politics at Salve Regina University and a regular columnist.