It is quite a feat for a song to achieve the #1 position on the Billboard charts, let alone to occupy the top spot for six weeks in a row. Fifty years ago, the song “Aquarius/Let the Sunshine In,” sung by the Fifth Dimension, accomplished this. It hit the Top 40 chart on March 15, 1969, reached #1 in April, and remained on the chart for 16 weeks.

The song, actually a medley of two songs, was written by James Rado and Gerome Ragni with the music written by Galt MacDermott. Bill Holman wrote the instrumental backing, played by session musicians of the Wrecking Crew. The actual recording of the song was unusual in one part was recorded in Los Angeles and the other in Las Vegas, before mixed together.

The idea for the song came from serendipity. Billy Davis, Jr., the lead singer of the Fifth Dimension, left his wallet in a New York City cab. The man who found it was involved in the production of the musical Hair. He invited the group to see the show, in which they heard a segment of music entitled “Aquarius.” Enthused with the segment, they contacted music producer and engineer Bones Howe who took two segments of music and “jam[med] them together like two trains.”

The singing group, the Fifth Dimension, originated in Los Angeles in 1966, and included Marilyn McCoo, Florence LaRue, Billy Davis, Jr., Lamont McLemore, and Ron Towson. Before “Aquarius,” they had seven Top 40 hits, the biggest being “Up, Up, and Away,” and “Stoned Soul Picnic.” During the group’s high period, 1967-73, it had a total of 20 Top-40 hits. 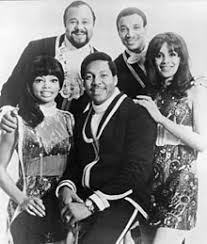 After the original group ended in 1975, the group with different members has continued to perform. Their music, published on many labels, includes the genres of R & B, pop, soul, sunshine pop, and psychedelic soul.

The lyrics of the song were rooted in astrology. Though astrologers differed on the year this new age would begin, the song proclaimed that a new “Age of Aquarius” was at hand sometime after the 20th century. This age was to be characterized by love, light, and humane, kind relationships, unlike the current “Age of Pisces.”

The singles version ran for 4 minutes, 49 seconds and finished with lead singer Billy Davis pumping out words of exhortation, “open up your heart” and “you got to feel it,” while the rest of the group sang “let the sunshine in” in bursts of three for a total of eleven times to end the song.

In the divisive and discordant Sixties, this song was so popular, I believe, because it offered the hope that larger cosmic forces were mysteriously at work to bring peace and harmony to an America—and a world—marked by chaos.

This could not have contrasted more with my ordered, predictable life at the time. When the song hit #1, I was finishing my junior year at West Point, very much in love with my future wife, and trying to win the conference title as a member of the Army baseball team.

Fred Zilian (zilianblog.com) teaches history and politics at Salve Regina University, is an opinion contributor for The Hill, and is a monthly columnist for The Daily News.

This entry was posted in Uncategorized and tagged Aquarius, Fifth Dimension, the 60s, The Sixties. Bookmark the permalink.