(This essay was originally published as “First in Independence,” on May 4, 2016, in the Newport Daily News.)

Two hundred and forty years ago today, the colony of Rhode Island became the first of the thirteen colonies to sever its relationship with Great Britain. Newport, a political and economic center of the colony, played an important role in the resistance leading up to the break.

There were two underlying causes for the action: first, the increasingly coercive actions of the British; and second, the rising resistance to these actions by Rhode Islanders.

While Great Britain was victorious in the Seven Years War (1757-1763), giving it dominance in North America over France, the costs were heavy. Great Britain believed it was fully justified in requiring the American colonies to pay their share of the war costs and also for the subsequent stationing of British troops.

It decided first to enforce more strictly the Acts of Trade and Navigation, challenging the colony’s long history of evasion and smuggling. Second, beginning in 1764, the British Parliament repeatedly imposed new taxes on the colonies. The Sugar Act (1764) increased the duty on molasses and sugar which Rhode Island merchants used to produce rum, a product traded in Africa for slaves. The following year it passed the Stamp Act, the first direct tax on all colonists. Further taxes followed with legislation such as the Townshend Acts (1767) and the Tea Act (1773).

Rhode Islanders saw such acts as violations of the rights and liberties granted by the hallowed Charter of 1663, issued to Rhode Island by King Charles II. They held firmly to the belief that only their colonial General Assembly could tax them directly, not the British Parliament, in which they were not represented.

The final aspect of British coercion was the stationing of British troops throughout the colonies, supposedly to protect the colonists from possible French incursions, and the increasing presence of the Royal Navy. In the case of Rhode Island, this meant the heightened presence of the British Navy in Narragansett Bay, which led to the confiscation of the colony’s trading vessels and also the impressment of colonists into service for the Royal Navy.

From 1764 to 1776, Rhode Islanders became increasingly belligerent in their reactions to what they viewed as unjustified British coercion. In July 1764, Newporters went to Fort George on Goat Island and began firing on the British schooner St. John, after the ship had seized a cargo of sugar from a New York merchant ship.  Soon afterwards the HMS Maidstone appeared at Newport with a similar mission: confiscation and impressment. Incensed Newporters stole one of its boats, dragged it to the Parade (Washington Square) and burned it.

In August 1765, anger was building toward those Newporters, called “Tories” or “loyalists,” who supported cooperation with the British.  Martin Howard led a group of prominent loyalists, named the “Newport Junto,” and called opponents of British rule “licentious, sordid, and incompetent.” Led by Samuel Vernon and William Ellery, a large group of men created three effigies of loyalists, dragged the effigies through the streets of Newport, hung and later burned them. The following day hundreds of men carrying axes and clubs ransacked the homes of the three loyalists who fled the town.

In the space of three years, Rhode Islanders escalated their resistance by burning two British naval ships. In July 1769, Newporters stripped and burned the Liberty, an armed sloop which had been harassing merchant vessels on the Bay. On June 9, 1772, John Brown of Providence and 60 men seized the HMS Gaspee by force, brought its crew ashore, and set the ship ablaze. Coming three years before the Lexington and Concord, this can be viewed as the first battle of the revolution. Historian Rockwell Stensrud states: “The total destruction of the HMS Gaspee … was a direct assault on the Royal Navy and thus an offensive action against the king and Great Britain itself.” 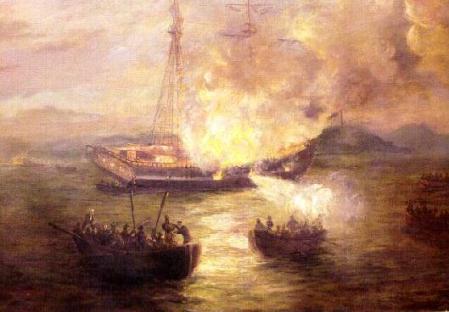 Burning of the Gaspee

The immediate cause of RI’s severance was the British Navy’s acts of coercion on the colony 1774-1776. In November 1774, the Rose, a British frigate with 24 guns captained by James Wallace, arrived at Newport. It continued the patrolling of the Bay and the halting of merchant ships. Fearful of a bombardment, Newporters fled the town bringing the economy to a standstill.

In March 1775, the citizens of Providence had their own “Tea Party,” burning some 300 pounds of tea. On April 22, 1775, three days after Lexington and Concord, the RI General Assembly voted to raise an army of 1500 men.

In July 1775, British ships opened fire on the town, repeating these attacks over the next several months. The Newport Mercury reported: “a great many inhabitants moved part of or all their effects out and many families … left town. The carts, chaises, riding chairs and trucks, were so numerous that the streets and roads were almost blocked up with them.”

In December, Wallace announced that his Christmas present to Newport was going to be its destruction. The Mercury reported Wallace as stating that inhabitants “should be burnt in their houses if they did not instantly turn out.”

On February 20, 1776, Ezra Stiles, Congregational minister, wrote in his diary: “All marketing from Narrag. & the northward cut off at Newport by the Fleet …. The Town with perhaps a Third of its Inhabitants yet behind suffering greatly for Wood & Provision ….  All Business stagnated.”

Finally, on May 4, 1776, the colony’s General Assembly, impatient with the Continental Congress’ lack of action, took the initiative. After listing the many grievances against Great Britain and its king, it declared that all allegiance to the king by “his subjects, in this his colony and dominion of Rhode Island and Providence Plantations, BE, AND THE SAME IS HEREBY REPEALED.” This was essentially Rhode Island’s declaration of independence.