The Causes of Peace, Part VII: Guernica and the Horror of War on Innocents

The horror that war brings to non-combatants or “innocents” can help to restrain the initiation of war and to curb its most destructive tendencies once it has begun. The bombing of the city of Guernica, Spain, in 1937, showed the world the horror of aerial bombing on innocents, a new feature of warfare in the 20th century.

This bombing took place in the initial year of the Spanish Civil War (July 1936 to April 1939). The war began after a declaration of opposition by a group of conservative generals against the government of the Second Spanish Republic.  The rebel coup was supported by a number of conservative groups including the Spanish Confederation of the Autonomous Right , monarchists, and fascists, eventually led by General Francisco Franco and a number of army generals.

Following the partially successful coup, Spain was left militarily and politically divided.  General Franco began a protracted war with the established government, as loyalist supporters of the centre-left Republican Government fought the rebel forces for control of the country. The conservative generals received the support of Nazi Germany and the Kingdom of Italy, as well as neighboring Portugal. The Republican government was supported by the Soviet Union and Mexico.

Although the US never formally took sides, American civilians eventually volunteered. Volunteers from the U.S. made up the Abraham Lincoln Brigade and served in what were called the International Brigades. They fought for Spanish Republican forces against Franco and the Spanish Nationalists.

While the airplane had been used in WWI, it had been used mainly for reconnaissance, that is, for gathering intelligence on enemy positions. There were no genuine bombers in WWI. During the interwar period, this changed. Technologies were developed to make planes bigger and capable of dropping bomb loads, eventually heavy bomb loads. We would see these bombers wreak their havoc in WW II; the Spanish Civil War was a sort of preamble to that conflict.

Guernica, a town in the Basque country of Spain, had a population of around five thousand. It was of great symbolic importance to the Basque people and the center of their cultural tradition. The raid took place on a Monday, ordinarily a market day in Guernica. Generally speaking, a market day would have attracted people from the surrounding areas to town to conduct business.

The bombing of Guernica on April 26, 1937, was an aerial attack causing widespread destruction and civilian deaths. German and Italian planes of  the German Luftwaffe “Condor Legion” and the Italian Fascist Aviazione Legionaria conducted the raid. There were five waves in the first attack which began at 4:30 pm and lasted until about 6:00 pm. Thirty minutes later three bomber squadrons of Ju-52 Junkers attacked.  At the same time, and continuing for around fifteen minutes after the bombing wave, German attack planes strafed the roads leading out of town, adding to civilian casualties.

The number of victims of the attack is disputed. The Basque government reported 1,654 people killed, but modern speculations suggests between 200 to 400 civilians died. The bombing has often been considered one of the first raids in the history of modern military aviation on a defenseless civilian population, and denounced as a terrorist act, although the capital (Madrid) had been bombed many times previously.

This aerial attack came to have such great significance because it was the first time in history that a town was destroyed by aerial bombing. 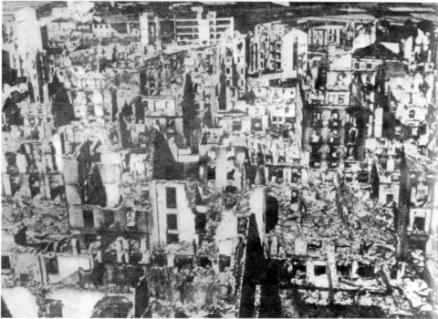 The Western military tradition includes what is called the Just War Tradition or Just War principles. One fundamental principle is that military action should not kill innocent civilians or non-combatants, people not directly or indirectly involved in the war. A second principle that applies is that of discrimination: The attacking state must discriminate between soldiers or combatants and those that are not combatants. Applying these principles to what we know about Guernica, it is clear that the Nationalist rebels led by Franco and their international supporters, the German and Italian aviation units, were not justified in conducting these bombing raids on the town of Guernica.

Guernica quickly became a world-renowned symbol of civilian suffering resulting from war and inspired Pablo Picasso to adapt one of his existing paintings into Guernica, the image that adorns the banner of this website. The painting went on to become a symbol of Basque nationalism during the Spanish transition to democracy. Today it is located in a museum in Madrid. A tapestry copy of Picasso’s Guernica is displayed on the wall of the United Nations building in New York City, at the entrance to the Security Council room, placed there as a reminder of the horrors of war. On April 26, 2007, Dr. Akiba, Mayor of Hiroshima and President of Mayors for Peace, compared the experience of Guernica to Hiroshima.

Human beings have often sought to give concrete form to our powerful collective longing for peace. After World War I, that longing led to the League of Nations and numerous rules and taboos designed to govern warfare itself. Of these, the most important was the proscription against attacking and killing civilian non-combatants even in times of war. However, the second half of the twentieth century has seen most of those taboos broken. Guernica was the point of departure of aerial bombing on innocents, and Hiroshima is the ultimate symbol. We must find ways to communicate to future generations, especially political leaders who have the power to initiate war, the history of horror that began with Guernica.

1 Response to The Causes of Peace, Part VII: Guernica and the Horror of War on Innocents