Rhodes Remains “All for the Union”

(This essay was originally published by the Newport Daily News on December 31, 2013, as “Despite hardships, soldier remained ‘for the Union.'”)

The year 1863 was filled with mud, battles, hunger, comradeship, and firmness in commitment to God and country for Elisha Hunt Rhodes, a Civil War soldier from the village of Pawtuxet, Cranston, who entered military service for the Union in July 1861, as a private and left it four years later as a colonel.

In February of this year, the 2nd R.I. Volunteer Infantry Regiment received a new commander, Colonel Horatio Rogers, Jr., whom Rhodes and the other soldiers quickly grew to respect and admire. Rhodes writes: “Colonel Rogers is a splendid fellow, and we like him already.” “Instead of making a great show of authority, he was very mild in his manner and it has had a good effect.”

Rhodes was delighted on March 21 to reach the age of twenty. “I am a man today.” “I begin to feel that I am an old man if hard work makes one old.” He is very happy to receive a birthday “present” of a ten-day leave to visit home.

During this year Second Lieutenant Rhodes served as the commander of Company D for a short period of time, but mostly he led Company B. In April he showed great character in not accepting promotion to captain, which COL Rogers offered to him.  He declined the offer, “because I did not care to step over the heads of ten First Lieutenants who are my seniors.”

His living conditions throughout most of the year remained challenging; however, he continued to show great resilience, remaining reasonably healthy and upbeat. In poor weather, mud was a constant companion. Early in the year at Pratt’s Landing, VA, he writes: “So the gallant Second [R.I Vols.] is again shoveling Virginia.” On January 24 near Falmouth, VA, he states: “Men, Horses, Artillery, pontoons, and wagons were stuck in the mud.” The wagons began to turn over and “mules actually drowned in the mud and water.” On November 24 at Camp Sedgwick, he writes: “It is raining, and we all live in mud, sleep in mud, and almost eat in mud.”

Rhodes clearly had good rapport with his men, as they often built him shelters and modest houses, so-called “shebangs.” On February 1 he indicates: “The men of Company D have built me a house.” It is outfitted with a fireplace and table on the first floor, a partial second floor with bed, walls of timber and mud, and the roof is pieces of tent. In August in camp at Warrenton, VA, he states: “My Co. ‘B’ built me a fine house of stone and put on a canvas roof.” On October 7 his men again built him a house: “One of my men found me a desk, so I am living in style.”

At several times during the year, he complains of lack of food. On a few such occasions, the unit is lucky enough to find blackberries. The men had had nothing to eat for two days when they discovered the gems. “On halting last night we found high blackberries very plenty and everybody ate their fill. They were good, too, for we were nearly starved.”

Remarkably, Rhodes was able throughout the year to keep his positive attitude. In April before a battle, he states: “I am well and confident of successful tomorrow.” After the battle, he indicates: “I am well and happy.” At the beginning of July, he writes: “I am tired—in fact I never was so tired in my life. But Hurrah! ‘It is all for the Union.’” In mid July, “I have not changed my clothes for five weeks, but still I am happy….” Finally in October: “… I am happy and feel well all the time.” 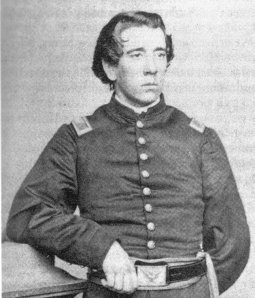 During this year the 2nd R.I. was involved in numerous skirmishes, battles, and encounters with Confederate forces. In early May in fighting near Fredericksburg, Rhodes writes: “One iron bullet struck me upon my foot causing me to jump into the air, but only lamed me a little. I picked up the iron bullet and put it into my pocket and will send it home.” On several occasions he describes encounters with Southern troops with whom agreements were made not to fire. In February near Falmouth, VA, he describes such an agreement, allowing men to visit the river banks. “It seemed queer to see them only a few yards away in their gray clothes. One of their bands played every day, and we enjoyed the music with them.”  In April near Franklin’s Crossing (Rappahannock River), Rhodes states: “Gen. Thomas J. Jackson (Stonewall) came down to the river bank today with a party of ladies and officers. We raised our hats to the party, and strange to say the ladies waved their handkerchiefs in reply.” The 2nd R.I. also saw limited action at Gettysburg. On the climactic third day, he writes: “As we were only a few yards in rear of our lines we saw all the fight.” “But what a scene it was. Oh the dead and the dying on this bloody field.”

Late in the year, a big change occurs: Rhodes is moved to the regimental staff and becomes the Adjutant, allowing him to purchase two horses. “So good bye sore feet ….”

At year’s end, Rhodes is wistful but remains committed to service. On December 31 he closes: “The United States need the services of her sons.” … “I am going, if God wills, to see the end of this wicked rebellion.”

(For further reading, see Robert Hunt Rhodes, ed., All for the Union.)

See the final essay in the series: “Amid Horrors of 1864, RI Soldier Perseveres.“

1 Response to Rhodes Remains “All for the Union”