(This essay was originally published in the Newport Daily News on May 22, 2013.)

Native Americans, while continuing efforts to protect their tribes and lands, fought bravely on both land and sea for both the Union forces and the Confederate forces in the Civil War. Some 20,000 Native Americans saw action in numerous battles, including Pea Ridge, Second Bull Run, Antietam, Chattanooga, Wilderness, Spotsylvania, Cold Harbor, and finally Petersburg.

Serving for numerous reasons, they volunteered and were also conscripted into the fighting forces. They viewed service and the meager pay as a means of lifting themselves and their families from the grinding poverty they experienced by the 1860s. Treaty obligations forced some into service. As with white young men, they were also drawn by the sense of adventure. Laurence Hauptman indicates that the most important reason was “their tenuous existence in both the North and South…. They were dependent peoples as a result of the American wars of conquest, treaties, or economic, political, social, and religious changes introduced by the ‘Long Knives’ [whites].”

Like their white comrades, they endured the same ill effects of war. Once captured, they were sent to the same prisoner of war camps, and they also became refugees of war. The war made them lose more of their self-sufficiency, a process which began with the arrival of the first European settlers in the early 1600s. They became even more dependent on the ‘Great Father’ (U.S. government) for their survival.

Like African-Americans, they had to endure the same racist attitudes whites commonly held at the time. The units in which they fought were segregated—consisting of Native Americans and African-Americans. Instead of the thirteen dollars per month pay received by whites, a Native American in 1864 received only seven dollars. In general they received poorer medical care, sustaining twice the death rate from disease compared to whites. The commanding officers of colored units were generally white.

A number of Native Americans distinguished themselves during the War, a few rising to high rank. Stand Waite, Head Chief of the Cherokee Nation (South) was the most successful Confederate commander in the Trans-Mississippi West region. He was the last Confederate general to surrender his troops at war’s end in June 1865. Colonel John Jumper, a Seminole chief, commanded the Seminole battalion in the Confederate Army. William Terrill Bradby, a Pamunkey Indian, served both on land and sea for the Union. During the Peninsular Campaign, he served as a scout for the Army of the Potomac. In 1863 he was transferred to duty on the James River, serving as a pilot there and later in the North Atlantic Blocking Squadron. Lieutenant Cornelius Cusick, a Tuscarora Indian serving in D Company, 132nd New York Volunteer Infantry, was twice cited for heroism during the War. Henry Berry Lowry, a Lumbee Indian of North Carolina, led guerrilla bands in 1864-65 that aided Union forces.

Austin George, a private of the 31st U.S. Colored Infantry (Union), was a Mashantucket Pequot Indian from southeast Connecticut. He was one of two Indians serving in F Company’s 131-man force. With the New London whaling industry depressed and his family receiving public assistance, George enlisted. In May 1864 the regiment was sent to Virginia to guard Union rail lines. By mid-June he was digging trenches outside of Petersburg. In the Battle of the Crater in July, George was one of many casualties, sustaining a bad wound to his left shoulder. His unit helped to tighten the noose around Lee’s Confederate forces near Appomattox in April 1865. Mustered out of service in June, he was awarded in December 1866 a half-pension of four dollars per month for his shoulder injury.

Colonel Ely S. Parker, a Seneca Indian, served as General Ulysses Grant’s secretary during the last years of the war and transcribed Lee’s official surrender at Appomattox. He later became a brigadier general and the first Native American to serve as U.S. Commissioner of Indian Affairs. 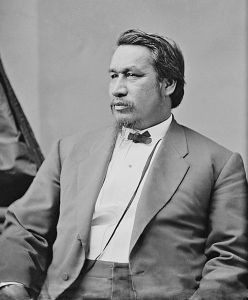 Probably the most important Native American contribution to the Southern war effort in the East came from the Cherokee of North Carolina in a unit of whites and Native Americans which came to be known as the “Thomas Legion of Indians and Highlanders.” In his youth William Holland Thomas became fascinated with the Cherokee. He was adopted by Chief Yonaguska (Drowning Bear) and became the de facto chief upon Yonaguska’s death in 1839. When the war began, Thomas recruited 200 Cherokee as home guards, the Junaluska Zoaves, and eventually hundreds more for the Legion. In 1862-63, the Thomas Legion largely focused on pacifying Eastern Tennessee by guarding mountain passes, hunting spies, enforcing conscription, tracking deserters, impressing crops and livestock, and obtaining loyalty oaths.