(This essay was originally published in the Newport Daily News on September 22, 2012.)

One hundred fifty years ago today, President Lincoln issued his Emancipation Proclamation, freeing all slaves in rebel held territory and changing the nature of the Civil War from one of restoring the Union as it was to one of destroying the South’s war-fighting capability and its way of life based on slavery.

By mid-July, 1862, a number of events had transpired to push Lincoln toward Emancipation. First, the Union Army of the Potomac, led by Major General George McClellan, had failed to capture Richmond, the capital of the Confederacy, in its Peninsular Campaign. After the Seven Days’ Battles (June 25-July 1, 1862) Lincoln ordered the evacuation of Union forces from the peninsular.

Second, the Congress had passed legislation that indicated a tougher war policy. The first empowered the president to enroll “persons of African descent” for “any war service for which they may be found competent.” Congress also passed the Second Confiscation Act which punished “traitors” by confiscating their property, including slaves who “shall be deemed captives of war and shall be forever free.”  Even moderate Republicans were now saying the war had to be fought with different principles: the time for “white kid-glove warfare” had past.

Third, there was a decreasing flow of volunteers to serve in the Union forces. Several governors told Lincoln that they could not meet their recruitment quotas unless he changed his policies on slavery.

Fourth, both Great Britain and France seemed poised to recognize the Confederacy, a move that could be deterred by emancipation.

More and more Union soldiers wrote home that the North had to take off the “kid gloves” with “traitors.”  One officer wrote that the “iron gauntlet must be used more that the silken glove to crush the serpent.”

Over the preceding several months Lincoln’s views had changed. By mid-July he felt ready to move. “Things had gone on from bad to worse, until I felt that we had reached the end of the rope on the plan of operations we had been pursuing, that we had about played our last card, and must change our tactics, or lose the game.” He was now convinced of the necessity for “forcible abolition of slavery,” and so he began to draft a proclamation of emancipation. The war he said could no longer be fought “with elder-stalk squirts, charged with rose water.”

On July 12 he called Congressmen of the border slave states of the North to the White House and told them to accept compensated emancipation or events might overtake them and they would have nothing for their slaves. After they rejected his offer, Lincoln no longer felt so constrained to conciliate the border states, although he did feel that the “blow must first fall on [the rebels].” He decided that emancipation was a “military necessity, absolutely essential to the preservation of the Union. We must free the slaves or be ourselves subdued.”

On July 22, 1862, President Lincoln called a Cabinet meeting at which he announced his intention to issue an Emancipation Proclamation. Most approved of the measure. While supporting it, Secretary of State William Seward recommended postponement “until you can give it to the country supported by military success.” Otherwise the action might look like “the last measure of an exhausted government ….” 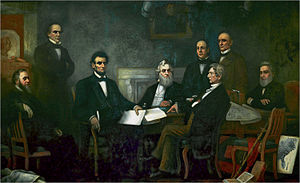 Lincoln looked for a sign from God. To a group of Chicago Christians, he stated: “It is my earnest desire to know the will of Providence in this matter. And if I can learn what it is I will do it!”

While not a decisive Union victory, the Battle of Antietam/Sharpsburg (September 15-17, Maryland) succeeded in destroying enough of the Army of Northern Virginia that it recoiled and retreated into Virginia. Lincoln felt he had what he needed.

Five days later on September 22, 1862, Lincoln issued the Emancipation Proclamation to take effect on January 1. He drew his authority for it from his war powers as commander in chief to seize enemy resources. Though he had always believed in the immorality of slavery, he did not believe he had the constitutional authority to act against slavery in states and areas loyal to the Union. The Proclamation stated that “all persons held as slaves within any State … the people whereof shall then be in rebellion against the United States shall be then, thenceforward, and forever free.” With this action, Lincoln elevated the war to a higher plane. “If my name ever goes down in history,” he said, “it will be for this act.”

Two days later Lincoln responded to serenaders who came to the White House: “I can only trust in God I have made no mistake. It is now for the country and the world to pass judgment on it.”