The Civil War’s Most Accomplished Newporter

(This essay was originally published on June 27, 2012, in the Newport Daily News as “Newport’s Gen. Stevens exemplified courage.”)

The most famous Newporter of the Civil War was of Newport but not from Newport. Isaac Ingalls Stevens was born and raised in Andover, Massachusetts. His close connection to Newport stemmed from his military assignment to Fort Adams, his marriage to Newporter Margaret Lyman Hazard, and his burial in Island Cemetery in Newport.

In 1839 Stevens graduated from West Point at the head of his class and was commissioned as a second lieutenant in the Corps of Engineers. He was ordered to Newport to continue building Fort Adams, begun twenty years earlier and nearing completion. He reached the city in July 1839, and boarded at Ms. Castoff’s boarding house at Spring and Ann Streets.

While stationed here, he met Margaret Hazard, the daughter of Benjamin Hazard, a lawyer and member of the state legislature for 31 years. 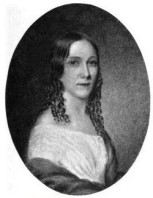 They were married September 8, 1841, and eventually had five children together. The first child, Hazard, was born in the Wanton Lyman Hazard House on June 9, 1842. During the Revolutionary War, it was the home of John G. Wanton, a wealthy merchant and son of the colonial governor, Gideon Wanton. Today it stands as Newport’s oldest surviving house. (To visit the house, see www.newporthistorytours.org, “Colonial Site Tour.”)

While slight of frame, Stevens’ remarkable intellect and leadership ability are shown by his record of military service and his numerous achievements outside of the Army. He rose to be the adjutant of the Corps of Engineers during the Mexican-American War, 1846-1848, where he saw action at Vera Cruz, Cerro Gordo, Contreras, Churubusco, Chapultepec, and Mexico City, in the last battle sustaining a severe wound. From 1841-1849, he oversaw the fortifications of the New England Coast. From 1849-1852 he headed the coast survey office in Washington, D.C. In 1852 he resigned from the army and in 1853 became the governor and superintendent of Indian affairs of the new Washington Territory in the northwest. On the way to the Territory, he surveyed a railroad route across the northern part of the country. In both 1857 and 1858 he was elected as the Territory’s delegate to the U.S. Congress.

There was no question of his sympathies once the Civil War threatened the Union. In his biography written by his son, Hazard wrote: “Governor Stevens was preeminently a national man in all his ideas and sympathies. His Revolutionary ancestry, his West Point training, his participation in large national interests … strengthened his love for and pride in the great Republic, and made sectionalism or disunion utterly abhorrent to him. Like Webster, he regarded the Union as the palladium of national liberty, life, and power, and its preservation the highest patriotic duty.”

In his letter to Secretary of War Simon Cameron dated May 22, 1861, Stevens stated: “Sir, – I have the honor to offer my services in the great contest now taking place for the maintenance of the Union in whatever military position the government may see fit to employ them.”

On September 28, 1861, he became a brigadier general and led his troops during the Port Royal Expedition. Now a division commander, he saw action June 16, 1862, at the Battle of Secessionville/First Battle of James Island. The Union troops were defeated in this single attempt to capture by land the city of Charleston, South Carolina. 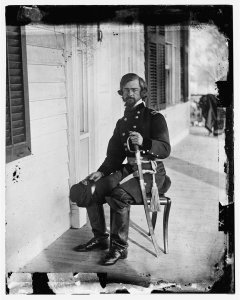 General Stevens during the Civil War

Stevens and his division were transferred to Virginia and became part of the Union Army of Virginia under Major General John Pope. August 28-30, 1862, Stevens’ division fought in the Second Battle of Bull Run, in which Confederate General Robert E. Lee defeated General Pope.

On the very next day, General Stevens engaged the forces of Confederate General Thomas J. “Stonewall” Jackson in the Battle of Chantilly/Ox Hill, as Jackson attempted to deny the line of retreat of the Union Army. Though outnumbered, Stevens’ forces attacked across an open field and achieved initial success. During the Confederate counterattack, Stevens attempted to rally the 79th Highlanders, his former regiment. Five color bearers had fallen. Stevens himself raised the regimental colors as a wounded bearer shouted, “For God’s sake, don’t take the colors, general. They’ll shoot you if you do.” Ignoring this plea, Stevens cried: “Highlanders, my Highlanders, follow your general!” The regiment charged, and the Confederate counterattack was halted. Stevens lay dead, a bullet through his temple, the colors lying on his head and shoulders.

In March 1863 General Stevens was awarded posthumously the rank of major general. He is buried in Island Cemetery, Newport.